A new journal around play and playfulness in adults? 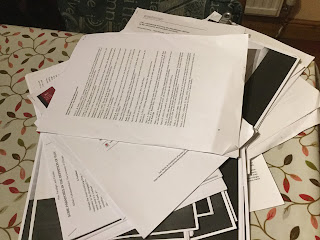 I've been analysing some data recently and started to think about where I might be able to write it up for. What journal would suit something on adult play? There are plenty of digital games type journals, and a few play journals that concentrate on aspects of play in children, there isn't a great deal of choice if you want to publish research on play in adults. There are options, of course, but adult play seems on the periphery of even the best options out there. Add in my fussiness over things being as open access as possible, and that reduced the field even further.

After a bit of whinge on Twitter, I seem to have agreed to set up a journal specifically for articles on Adult Play. 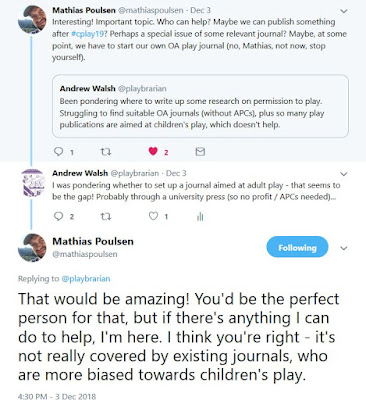 I've pulled a proposal together and sent it to the University of Huddersfield Press to consider... so in the next few weeks I should know what they think and either go ahead with them or another (uni?) press.

There has been an overwhelmingly positive response from interested people and I have loads of people offering to be on the board / reviewers, as well as interest in writing for it. So (fingers crossed), early in 2019 I should be able to start firming up a new journal and putting out the first call for papers - perhaps with the first papers being published late Spring, early summer 2019?

Whatever happens, my intention is the the journal to be fully open access (including "licence to publish" rather than assigning copyright to the journal, CC-BY licences), no APCs (charges to authors), primarily double blind peer reviewed (but with a section for less traditionally academic material / formats too), and international in scope.

The name of it is still under discussion (might do another post about that), but will probably be something like the "Journal of Play (or playfulness?) in Adulthood" to make it easy to discover and see at a glance what it is about!
Posted by Andy Walsh at 09:22 2 comments: