The escape room induction had it's first outing today, not for "proper" students, but for (mainly) staff at Huddersfield Uni at the CLS (Computing and Library Service) Showcase, where we show off things that are going on in our service.

Lots of people came and had a go, either at the full induction puzzles, or at a subset of them, or just for a quick look. The few photos below are people actually using the boxes.

It seemed to go down really well, and I might make one or two tweaks based what I've seen today, but I think it is about ready to try with real students... 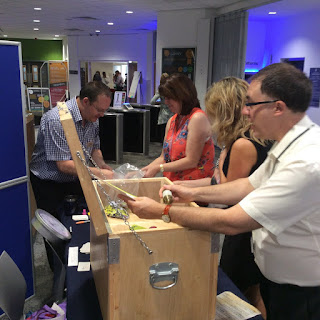 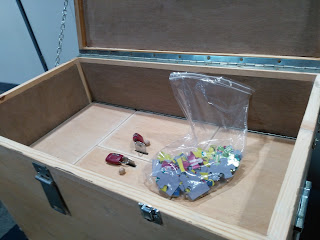 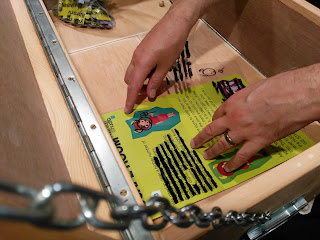 Quick update (23rd June)  - attendees voted for their favourite stand on the day and I won! So the escape room induction thingy was the "people's choice" :-)
Posted by Andy Walsh at 15:17 2 comments:

A "library camp", but making stuff?

I've been to quite a few library camps (national and local ones) and they can be a really good day - lots of ideas bounced around, lots of really positive people, and a "different" mix of people than specific subject or sector based conferences.
After the first one or two though, I found myself walking away from them thinking "but we haven't DONE anything"! Lots of ideas might be generated, but I know that most people won't take them any further... so for a while I've fancied doing something that was more of a "making" camp.
So, if I ever get around to it, who would fancy something like the following, and how would people like it to be run? Let me know at the survey, but my vague initial thoughts / options follow...
It would be something like:
1) Two day camp (so plenty of time to make stuff), but people could probably come for just the first day to start things off? (But probably better to see it through both days.)
2) Probably set a theme (fitting in with stuff I do, perhaps "creating games for libraries" or "making escape room puzzles for libraries"?) but not pin it down any further - so people would follow the open space idea of pitching ideas on the first morning and we'd split into groups to create them (depending on numbers!).
3) Aim to have created (pretty much) finished materials that would be available for all by the end of the two days. Condition of attending would be slapping a creative commons licence on anything created during the camp.
4) If it fitted in with stuff I did (like the games), it'd be easy enough for me to bring a load of materials to be used.
5) Could be done completely on the cheap (free or dirt cheap to attend), so a room or two somewhere and everyone fend for themselves in terms of food / drink / accommodation. Or it could be done a bit posher (perhaps hire a full venue including accomodation? Or a residential educational type place) which would mean accomodation, some or all catering, and space to make stuff all thrown in. The more expensive option would probably be cheaper overall for people who stayed (as the price would be likely to be less than booking hotel rooms individually, never mind the extra stuff!) but would look more expensive at face value.

If anyone is at least vaguely interested, could you let me know you thoughts on the quick and dirty survey I've set up please?


I'm currently putting my box of goodies together for the School Library Association. They run a weekend course every year for members and I'm doing a couple of (very) short workshops this Saturday on making games for information literacy. We have about 45 minutes for each of the workshops, which is really pushing it for time, but I'll give them a structure to follow to make games and we'll see how much people can create in a very limited time!
I've done this sort of taster workshop a couple of times now in just an hour, but it will be a real challenge to do it in even less... hopefully some people will fancy coming to a longer / fuller workshop with me at some point in the future, so this will wet their appetites. If nothing else, I'll try to make it fun :-)
I suspect it will also be too rushed to take videos of prototypes like I normally do!
Posted by Andy Walsh at 09:39 No comments:


On Monday 6th June, I'll be running a Lego workshop in Cambridge. I think I had a flying visit to Cambridge once before and spent a few hours there about 30 years ago... and not been back since! So slightly disappointed I won't be able to find time to explore properly.

That said, I'm there to run a Lego workshop, which is a fun thing to do in it's own right... so looking forward to Monday, and if I remember to take some photos and videos I'll post them on this blog afterwards.

I'm doing the workshop for ARLG Eastern, so expecting plenty of HE and FE people there, and hopefully a mix that includes a few non-librarians too, fingers crossed :)
Posted by Andy Walsh at 16:47 1 comment: