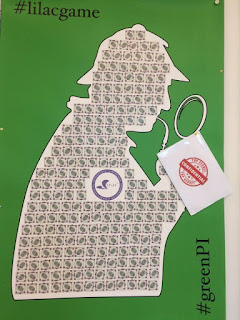 This might be a slightly odd place to stick a few brief thoughts about the LILAC conference 2016 in Dublin, but seemed appropriate just because of points 1 & 2 below!

LILAC is always a good conference, I've been to it now every year I've been a librarian... so just missed the first one! It was the 3rd conference I've been to in a 3 week period, so I was tired before it started, but it was by far the best. These are the things that stuck out for me this year...

1) The keynotes were great. Keynote speakers are often a highlight of LILAC, but some years are better than others. This year was particular good in terms of "performances"! The first Keynote was non-traditional - Alex Moseley and Nic Whitton had us playing and interacting throughout their slot, introducing ideas around play and learning in a practical way. Second was an absolute star - Char Booth. She talked a lot about critical librarianship, reflection and teaching - insightful, incredibly engaging and a great speaker overall! Finally was James Clay. His subject matter was a bit more run of the mill, talking about digital capability rather than being as free as the other two with topic (he is currently working for JISC on a project around this, hence the focus of his talk). Even so, James is an old hand at this sort of things and put on a really engaging, amusing and lively performance... just what was needed on the final day after the conference dinner!

2) A strong theme of play and games pervaded the conference. There were a fair few talks that touched on this (including mine and Jess's talk), including one of the keynotes. In addition, we had the first Lagadothon this year. The idea was, people would present a prototype  of an information a skills / literacy teaching resource and a winner would be selected who would get £500 to further develop the prototype into a finished resource. Surprisingly (to me!) everyone presented a game of some sort! (Pleased to say it was me that won, with an escape room idea.) Finally, we had a conference game (#lilacgame) running throughout the conference, ably run by Rosie Jones (and hindered by her evil alter ego, @PIofEVIL) I might have been a little competitive with this...GO TEAM #GREENPI!!!

3) There was stronger undercurrent of critical information literacy running through the conference than ever before, which was great to see... I couldn't help wondering whether this marked the point where larger numbers of people are starting to think about this sort of thing. I could see it ending up as the major theme next year, as play was (for me) this year.

4) As ever, the people at LILAC were great. Lots of old friends and colleagues to meet up with, but also some new ones (to me!) too who really made an impact on me. I've never been to a conference other than LILAC which has such an amazing bunch of people (from all over the world) attend.

5) Finally, apparently posh hotels don't appreciate librarians playing the piano and singing in the early hours of the morning. Who knew?
Posted by Andy Walsh at 15:45 No comments: