During the i2c2 conference, I gave everyone challenges to complete - Daan Van Loon's was to write a summary of the conference! So here it is... 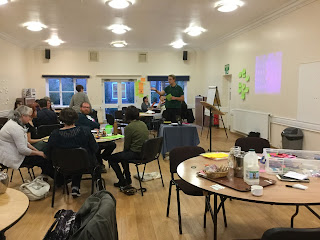 “Is this normal for a library conference?”
- the old me –

I have been to conferences before, as a linguist, an historian, musician, teacher, even as an actor. But this was my first library conference, and I was very much aware of that fact as I walked out of the Joseph Rowntree Conference Hall on Cober Hill, near Scarborough, on Tuesday morning. Something was happening, and not only to me. Anthropologists state that it is possible for panic to act like a contagious disease. Inspiration can do that as well. I know. I was there.
It started with the announcement that we had to create our own nametag. Before I knew it I was chatting with fellow colleagues on how there can never be enough feathers on a badge, how orange sharpies had to be somewhere in the vicinity and musing on whether my own badge would pale in comparison to the incredible creations of my peers. Looking back, it is clear that we probably almost all had that feeling, as ‘hidden under any bushel you will find twenty-four librarians, apologizing for taking up space’.
To hell with linear reports, I will come back to that first afternoon later. I want to go the start, the thing that changed us. The keynote by Emma Coonan, presented on Tuesday morning of the 14th of November. She showed us a mirror, her own mirror image, the mirrors that we create around us and the mirrors that we should always use, but almost never do.
Be free to fail. Do not distance yourself, but stay close. Be humble. Be proud.
I do not know whether she had anticipated this, whether Andrew Walsh had anticipated it, but Emma showed us all a side of being a librarian that took us exactly where we had to be. At least, that was what happened to me. It felt like we all shed some weight, moved out of our library traditions, corporate duties and fears, and became a group of friends, eager to spend more time together. Eager to play and eager to create. And then there was Lego. I like Andrew’s comment on twitter after the conference, that ‘it isn’t about the Lego’. It was about what we envisioned the Lego to be. Animals, ideal librarians, everybody nodding along to completely different interpretations of the things that we do and the things that we are. I have not felt more at home in a work-related environment in years. We talked about how innovation can be blocked, how hard it can be to overthrow old perceptions and prejudice. We laughed about all those obstacles that stand in our way, because we are free to fail. Proud and humble.
I love how memory is not a linear thing, because my mind has connected all the amazing and inspiring papers that were presented to that first keynote. Because they were about how we could create new ways to be librarians, using sound, zines, theater, games, embedding ourselves, mapping and having spaces to make stuff. They were about how easy it is to fail, but also about how rewarding it is to try, or to paraphrase my dear colleague from Chattanooga, Tennessee: ‘there are countless roads to your destination. The one that gets you there is the right one’. I think that at that point, had the I2C2 conference been finished, I would have been satisfied, having been truly inspired. Then the second keynote happened.
Rosie Jones told us, on Wednesday morning, that she only had a PowerPoint so that she would not sidetrack too much. She then took all that energy, all the inspiration, the creativity and open ideas of the previous days and started to mold it. Rosie talked about how to get out into the real world and actually use that inspiration as a librarian. To use failures in a professional capacity, to not be daunted by the weight of responsibility. To play. If you think that something is starting to get too bureaucratic, change it. A meeting with too many points on the agenda? Change it. Boring conferences without any interaction? Change it. Let people cheat at your games, because it is not the game that matters, but that it is played. And fail, fail badly.
When I got back to my library yesterday, my colleagues asked me how the I2C2 conference was. What the latest intel on information literacy is. If I have any new ideas. I talk about Lego and play do, about meeting lovely people, about feeling secure enough to play the piano for them in the morning. About cider tasting, ice-cream and steampunk folk. It is only after that first round of standard chitchat that I suddenly turn serious and say that I have probably just been changed for life. That I will probably not forget this first library conference as long as I am a librarian. That I feel sad that it is already over but ready to rumble at the same time.
There is now a post-it on my laptop. It says:
Be free to fail. Do not distance yourself, but stay close. Be humble. Be proud. And PLAY.

Feedback from i2c2 and a quick reflection 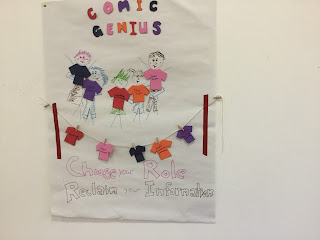 At the very end of i2c2, I asked "What was the best thing about i2c2" and "What would you change about it". The full feedback follows at the end of this post, but I thought I'd pull a few bits and pieces out to reflect on here, though I'll be reflecting on it all offline properly later on!

1) "...this process has taken me down a very exciting path." Out of all the feedback, this struck a chord with me. Any event that has helped attendees change and develop, in such a positive manner, must be worth organising!
2) I'd thought I'd put together quite a light programme with lots of time built in to reflect and create within it, including lots of social time. We had long tea breaks and lunch breaks, all the sessions had time to "do" things rather than just listen, we finished fairly early on an evening and had the social events within the venue itself. The festival of dangerous (library) ideas was a big opportunity to reflect on our profession, our workplaces, and what we'd heard so far. We finished at lunchtime on the 3rd day so people without an horrendously long journey might have time for a little explore of the area. But a recurring theme in the feedback was the opposite, it said stuff like "more time to reflect  & create"; "More “break-out” time for games and conversation"; "More free time to reflect / play". I need to think much more clearly before I do something like this again about how we can explicitly label time to make the reflection / action clearer and to label sessions on a timetable in such a way that it gives permission for people to have this time out and reflection. One to ponder on for me... must be able to do this much more effectively!
3) We had a dog (Panda) come along to the conference... "Panda has loved her first conference"; Q: What was the best thing? A:"Dog!". I think all conferences from now on should have at least one dog attending. Please make this happen fellow conference organisers 🐕.

This is the first of a few posts about the i2c2 conference I've just run at Scarborough - hopefully it fits okay here as it was a playful, creative experience!

A quick response to a twitter exchange follows, mainly as I can't really reply properly in the shortened form that twitter needs! It is quite "stream of consciousness" in nature, please don't feel this is well argued out, just throwing a few thoughts together:


Just found myself describing #i2c2 to another group of lib folk as a completely transformative event. I genuinely think I am changed (in all good ways!) from my 3 days with you all <3
— Emma Coonan (@LibGoddess) November 16, 2017

Backed up by Daan, which prompted Emma to wish for library managers to experience an event like it...

So... this event had one senior library manager present, Rosie Jones, who is playful, creative, and innovative. However she isn't necessarily representative of the "typical" senior library leader! Why didn't we have other senior managers from the other library world? How could we expose them to similar ideas and chances to develop in a creative and playful way?

Based completely on my own experiences (I've been to a fair spread of library conferences over the last 13 years!), I'd say that senior library managers like to flock together for their conferences. In the academic library world that means things like the SCONUL conference, or maybe the RLUK conference. I've no doubt that the equivalent is true in other sectors too (SCL conference for public library bosses?). That's not surprising - they have so many people placing demands on their time they may struggle to get away from the workplace, so when they do, networking with their peers may be the most important factor, so they want to go to those conferences that allow that interaction. As you go up the management ladder in any organisation, it can also be a very isolating experience - it can be seen as dangerous to give too much information away in discussions with more junior staff. What if you say something that is interpreted as being critical of your own workplace / colleagues? What will happen if that gets back to them after an open discussion at a conference? That could act as a deterrence to attending a conference that could mix together anyone from student to library director.

So we could do a similar type of event *just* for senior library managers... or try to persuade existing events like SCONUL conference to allow us to disrupt their usual cosiness, but would there be any point in it? Wouldn't that lose the massive benefit of getting the multiple voices, ideas, and approaches that i2c2 brought together? I suppose we could have a new event too just targeted at them, but that would compete for their limited time too, and I suspect the amount of management buzzwords I'd have to throw together to make it feel "for them" might make me feel slightly too dirty...

I don't how we'd persuade more than the odd few outliers amongst senior library managers to come to a more inclusive event as that would feel riskier for them than one just for them, but it would be much more worthwhile.

So... I've no idea how to do an event like i2c2 that more than the odd one or two senior library staff would feel able to go to, even though they would benefit more than most from attending such an event. Anyone else any ideas?