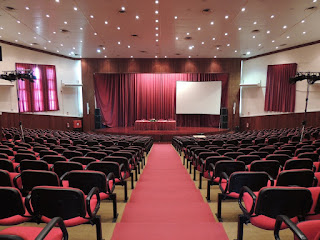 I've had spam from predatory journals for years, together with a much lower level of dodgy conference invites. The conferences used to be fairly easy to spot, sending the sort of email that says "We want to invite you to chair a session / give a talk at the <conference name> that covers <ever subject under the sun> in <exotic location>".
It may be my imagination, but the conference spam seems to be arriving much more regularly now and is a lot harder to critically evaluate than it used to be. It isn't as obvious any more which are predatory conferences (which may not actually run, or will be very poor quality, often at the same time as multiple other "conferences" organised by the same people), and which are "real" conferences that would be genuinely valuable for people to attend.
I came across one a little while ago that I thought would be great to speak at, but I'd never heard of before, so I was suspicious - but as far as I could tell, it was a genuine, good quality conference that would be a valuable experience. Alongside that, I got asked on 3 occasions over the period of about 2 weeks about conferences by early career researchers - they were the opposite to me and were either considering submitting to conferences, or on one occasion had already sent a paper in which (of course!) was accepted, thought the conferences seemed clearly dodgy to me.
So I started to think about what questions we should ask when we come across a conference to judge whether it is predatory or not... with the idea that at some point I can use these as a basis of a learning game.

I have heard of Think, Check, Attend by the way, but it seems a tad brief, and there isn't the same opportunity to draw out the grey areas that we might get through playing a game! I think a "checklist" approach can help with the ones that are most clearly "dodgy", but don't show the full picture a game and associated discussion might do...
Read more »
Posted by Andy Walsh at 09:16 No comments:

I'm due to give a talk at LILAC in Liverpool in a few days time on "Play as Transformative Information Literacy Education", the slides above are a sneak preview of the slides I'll be using. If the link doesn't work, they can be viewed directly on Slideshare.
Posted by Andy Walsh at 16:05 No comments: