Way back in March, I ran an educational escape room workshop in Helsinki. As a follow up, Eerika Kiuru & Janika Asplund interviewed me, which they wrote up for a journal called Signum. This has just been published (open access).

So if anyone wants to read my thoughts as I chunter away about escape rooms, play, innovation, and information literacy, the interview is online now... https://doi.org/10.25033/sig.65499
Posted by Andy Walsh at 10:19 No comments: 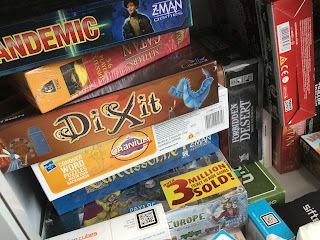 Just a random thought on board games / "serious" players of board games.

I've been following some discussions online where there are a high proportion of "serious" players of board games. That is, those people who play regularly, probably have a large collection of games, and who are "into" games enough to join groups online and IRL, to play and talk about them!

For some reason, I suddenly realised that many of these players don't actually like play. That is, they don't like the sort of play that the groupings I tend to associate with think of as play! I suppose much of this is summed up by Counterplay events and in individual form by people like Bernie De Koven.  Exploration, fun, freedom, randomness, non-competitiveness, are valued. Play with these groupings of people tends towards the free / spontaneous play that Callois called Paidia

The discussions in some of these board game groups often heavily criticise games because they include randomness, and a discussion the other day went further still. Some games I think are great specifically because they are short, fun, silly, with a strong random element were criticised for the same reasons that I like them!  It suggested that "good" games gave you "perfect knowledge" of the game, no randomness, with the winner always decided purely on how they apply that knowledge... and it is incredibly important to end up with a clear winner (including with collaborative games, winning against the game). I read this discussion and realised that these particular people were probably arguing that the only "proper" game is a controlled simulation. Any randomness, any chance someone could win by luck, was bad. Lots of them will play through a game on their own to see how it works before playing it with others, as the games are often complex and hard to understand - which fits in with the players with the best knowledge / skills wins. Their perfect game was entirely Ludic (see Callois again) - so the opposite end of the play spectrum.

I  wonder is this observation seems right to other people? Does the board game community tend towards this Ludic idea of play and reject the Paidic end as somehow "wrong"?

It's interesting to me as I also see it the other way round, with strictly controlled rules and boundaries (which the board gamers value) seen as "bad play" by some of the people on the other end of the spectrum! I just see them as different and valuable  / interesting in different ways...